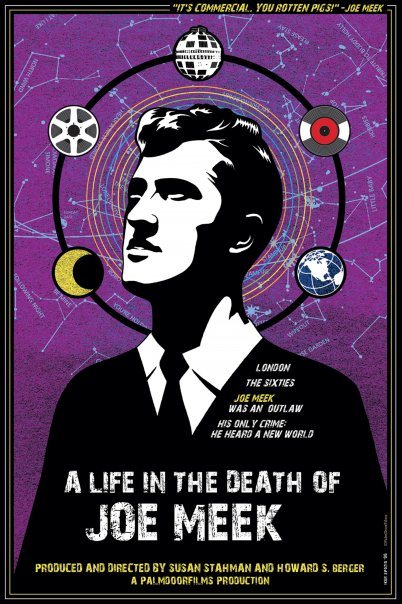 There was more than a little of the supernatural about the life of Joe Meek.

Halloween is knocking on our studio door. And our amazing party Muswell Hill Geisterfest! Be there! 31/10 from 4 pm. It’s going to be bonafidelicious!

In the spirit of all things paranormal (who wants to be normal anyway?!) have a read about the late Joe Meek. If you haven’t heard of Joe Meek then shame on you! Joe, who passed away tragically in 1967, was the world’s first independent record producer.  These days Joe Meek’s memory lives on, not just through his music and his international recognition, but in the passionate attempts of many North Londoners to make sure that Joe remains a local hero. You see, Joe lived and died not so far away from Bona Fide Studios at 304 Holloway Road where a privately erected plaque commemorates him and also based his studio there during the Telstar years. Fittingly, Joe still has a very loyal local following and a fan club that meet in the area monthly. Joe was passionate about the possibility of survival after death and made many eerie recordings in cemeteries and other allegedly haunted locations. Some of these were incorporated into his experimental and incredibly popular vinyl LPs. But like Amy Winehouse, another local musical legend who passed too soon, Joe also trod ‘a troubled track’.

In 1965, Holloway based Joe Meek who found fame as the world’s first independent record producer, approached David Farrant, whose name is now synonymous with what the press has since 1970 referred to as the ‘Highgate Vampire’, with some tape recordings he had made during what had become regular nocturnal visits to Highgate Cemetery West.  Meek believed that these tapes had captured the voices of spirits active in the cemetery, and indeed the tapes do seem to contain the sound of a female voice, speaking in distant and distorted sentences.  Subsequently, Farrant and Meek visited the cemetery together one afternoon, where Meek indicated that he had made the recordings on a path just above the Circle of Lebanon.

It was around this time that Meek’s obsession with the supernatural, and specifically the possibility of communicating with the departed, became dangerously out of control.

What may have been a natural psychic ability, coupled with an undiagnosed mental illness, caused Meek to experience intense bouts of paranoia and in February 1967 he fatally shot his landlady, before turning his single-barrelled shotgun on himself.

A Life in the Death of Joe Meek, a painstakingly researched documentary directed by Howard S. Berger which explores Joe’s life and demise, is currently touring Canada and America.

You can read more about Joe here: http://www.joemeeksociety.org/